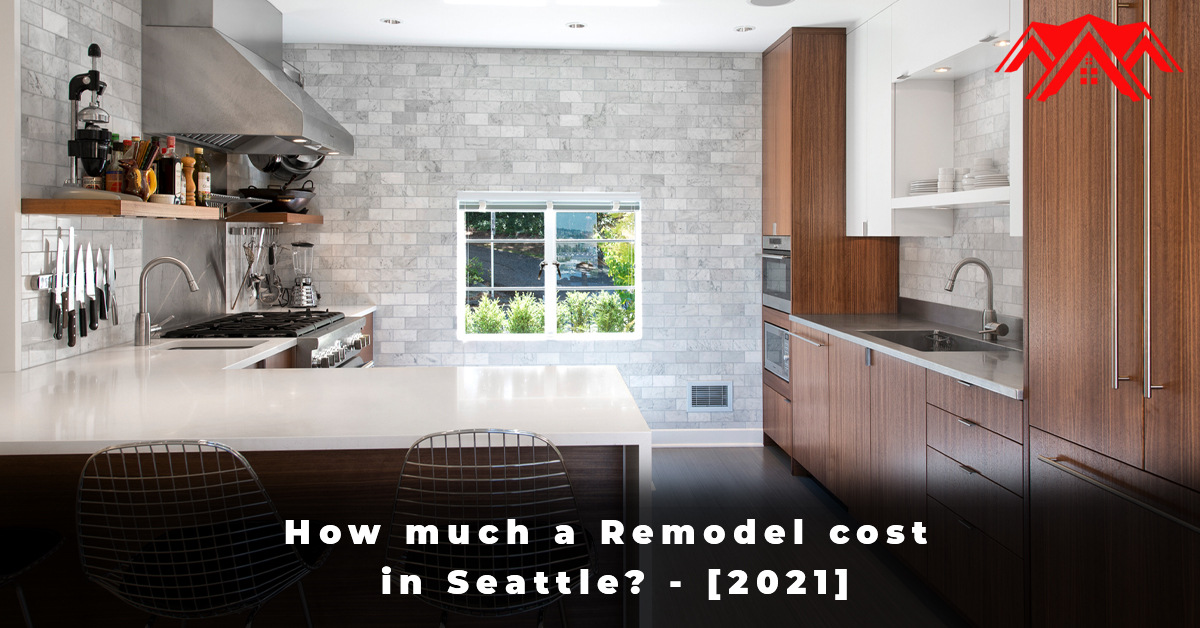 Thinking about remodeling your house in Seattle but confused about how much it would cost? The first step that every homeowner took is to search online about the cost, and we have seen many other articles that say the amount that is far away from the realistic price.

So, we decided to take the initiative and told you about the actual cost of the remodel in Seattle. We met with many local contractors and discussed every aspect of remodeling the house, kitchen, and bathroom. After that, we are compiling this fully researched comprehensive article to give you the exact price of remodeling in Seattle.

It is the first thing that affects the remodeling cost in Seattle or any place in the world. If you are on a low budget like you want to remodel your bathroom for $5000 and your Kitchen for $20000, you need to do some things for yourself; otherwise, the remodeling price would increase.

When you are doing remodeling of your house, you have two options go with the solo contractors that might cost less for you, or go for the remodeling companies that might cost you very high. If you decided to go with the solo contractor, you would have a limited budget and not a very big project. You need to spend your time finding the material for yourself.

But if you have a big remodeling project, then go for the contractor companies; they have a large team of experts that know every aspect of your house remodeling; the price might be higher, but the quality will also good. They will guide you step by step on how they plan to remodel your house and are also able to do some structural changes in your home.

They have good interior designers in their team that will help you design your home beautifully according to your requirements. They also have all the technical skill team like the plumbers, electricians and carpenters so, everything you need is in one company, but you need to pay them more money.

Ok, so now you have made your mind that you will go with the solo contractor or the company now don’t rush to select the one for you first do some research read reviews about that contractor ask local that took his/her services and then made your decision because if you choose the wrong contractor than this might also increase the cost of your remodeling.

It is the second thing that affects the remodeling cost of the home because every material has a different price and different methods to install. We live in a time of social media, which means we live to show the world, and everything should be very glamorous and photogenic so you can post good pictures on Instagram.

But the cost of that thing might be high because you need to make the structural changes according to your new design. If you want a rooftop barbeque lawn that might increase the cost of plumbing, electricity, and labor automatically, the remodeling cost will increase.

But you can also decrease this cost by reducing some high-quality materials with some budget options. We want to discuss the magazine costvsvalue’s report whose number is very close to the actual numbers mostly. According to them, if you plan to remodel your house, you need to have at least 10% more budget than the estimated price because some things can cost more than you expect.

However, we would say that if you are remodeling your old home, then you might have more than 20% of the budget to start the remodeling because there are always some extra expenses that take place when you begin the remodeling of your old home. When you hire a good company or contractor, he will ask you about your budget first and try to make all the best possible changes within your budget.

Kitchen remodeling is something that most people do if they are not able to remodel their whole house. Generally, the people are inspired by the Pinterest kitchen pictures and want to make that kind of cabinets, shelves, and everything, which might cost them a lot.

According to the famous magazine covering the cost of remodeling of homes costvsvalue you need to have at least; this $161000 Approx budget for your kitchen remodel this is more than the other areas of the US that cost around $142000 for the remodeling of the kitchen. Seattle is known to be one of the most luxurious areas of the US, so it is way more expensive than the other parts of the country.

The bathroom is the second part of the home that everyone wants to remodel; because everyone wants their bathroom to be lovely and peaceful, they renovate it. We will here want to mention the report of the Costvsvalue on the remodeling of the bathroom.

According to their report, if you are in Seattle, you will need around $60000 for your bathroom remodeling; this might increase or decrease according to your design and requirements, like if you want to do structural changes or not because that would increase your expenses.

If you are on a budget, then it might be less than the $60000, but it depends on your contractor; always try to hire a well-reputed company because they will make the best bathroom for you within your budget, but they will also guide you that what other things can be done in your budget.

If you are living in an old house, then you might have thought to remodel it, but the first question is that how much it would cost so, we will here again want to mention the reports of the cost vs value in 2021 and according to them if you are going to remodel you home in Seattle than it would cost around $185000 for basic remodeling.

But if you want to do luxurious remodeling of your home, it would cost around $300000 to $400000, but if the 2nd story adds to it, then the cost might double. It is not a fixed cost; it can vary according to your home’s size or location, so try to talk to your local contractors about the remodeling; they will give you the perfect idea of how much remodeling will cost.

Many people think that the numbers you see in the advertisements are correct, but they need to know that they are very manipulative numbers; they will tell you a less number, but when you contact them, the original number might be twice than you thought so, be prepared for this thing.

We can’t say that all the remodeling advertisements that came on the TV are false, but most are manipulative; that is why we have mentioned all the very close prices to the actual budget so you can choose according to your pocket.

When you have an actual number in front of you that will be costly for your kitchen or bathroom remodel, you can see how much you can afford o not; this will help you be more precise about your design and remodeling idea.

But one thing that you will have in mind is that when you are going to remodel the kitchen, bathroom, or any other part of your home, you should have at least 20% to 25% extra amount available because many times there are unexpected expenses happen during the process if you are not prepared for these expenses than that would be very bad for you.

The remodeling in Seattle might cost you more than any other part of the country because this is a luxurious city, so when you are remodeling the house, this thing should have in mind. In Seattle, if you remodel your home Seattle, it would increase your home’s value by more than 73%.

So, if you spent $100000 on remodeling, you can easily get it back when you sell your house. But the first rule is that your contractor should be reputable because if the contractor is good, he might give you some great budget tips that will enhance the design of your home, and it will reduce the cost.

We see many live examples of the people who bought new homes, remodel them, sell them, and earn a lot of money in this business. You can also study many articles on the internet that give you an estimated value that will increase if you are going to remodel your home.

Remodeling is an expensive task in the US, but especially if you live in Seattle, it is expensive than any other USA city. Many people are confused about the cost and estimated budget of the Remodel because the so-called advertisements feed them wrong numbers, and when they contact them, numbers are more than they expected.

There is no other article on the internet that can give you an accurate estimate, but we talked to many professional contractors and subcontractors and then drove this amount that is very close to the actual number. If you want to remodel your kitchen, it would cost you around $60000 to $80000 according to your design and requirements.

The number for bathroom remodeling is around $15000 to $ 20000 according to your requirements. You should know that nobody can give you the exact price because it depends on your design, finish, and area.

How much does it cost to renovate a kitchen in Seattle?
The cost of kitchen remodeling in Seattle, according to the famous magazine cost vs value report, is around $145000 and in the other cities of the US, the price of the remodeling is $131000 so, in Seattle, you have to pay more than any other city of US.
Why is remodeling so expensive in Seattle?
There is no doubt that the cost of remodeling in Seattle is more than any city in the US; there are some reasons that the boardandvellum.com explains, and according to them, the reasons are that the shortage of labor, materials are expensive, permit requirements, and the difference between demand and supply. These are some major reasons for the costly remodeling in Seattle.
How do I estimate remodeling costs?
The best way to estimate the remodeling cost is to talk to a good reputed local contractor. He is an experienced person, and he will guide you perfectly that it how exactly your requirements and design would have cost. The pro tip always makes the budget 20 to 25% extra to that amount that the contracted gives you because there are some unexpected expenses in the remodeling.
How much should a 10x10 kitchen remodel cost?
The actual cost of this kitchen can be determined according to your finish requirements, but if we generally say that the kitchen of 10×10 would cost around $20000 to $30000 according to your finish, if you want to know the price per square foot, then $80 to $ 180 per square foot according to your finish.