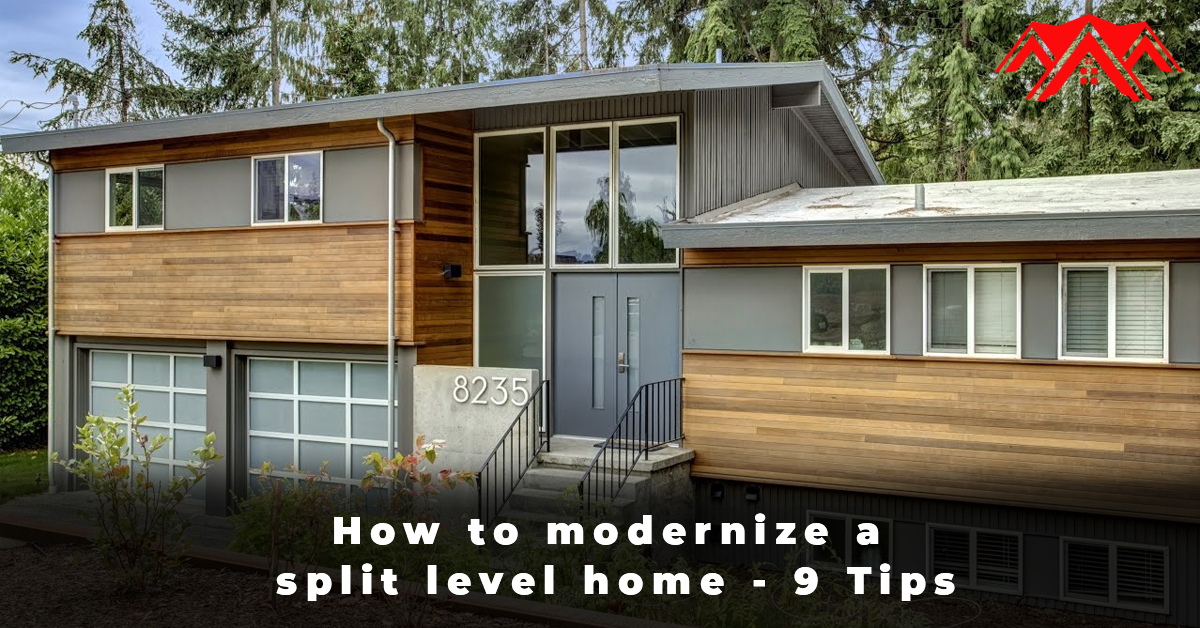 Split level homes were very famous in the years between the 1960’s to 1980’s. But one major downside of such homes is that despite ample space they have rooms divided with unnecessary walls. The choppy outlook of such homes not only blocks light and air but looks cramped as well.

Due to the unnecessary divisions of the rooms, you don’t really have much margin to put your furniture and other decor accessories in the way you want. The fittings and walls of such homes are also dated and cannot blend with the new furniture. These homes also lack modern-day basic amenities, and very little attention is there to the functionality.

You will also see rooms that are no more used, such as formal dining rooms. So, we thought of collecting you some projects that feature the before and after pictures of the remodelling process. They will give you a clear idea to maximize the available space and make it beautiful.

So that even if you stick to a traditional theme, it can suit your modern day needs. You can convert the rooms to other rooms, and make your home suitable to live in. In the remodel you can focus on space-saving options, such as built-ins, that are usually installed at overlooked places. So, here are some homes that are transformed and went from drab to fab after clever remodelling

How to remodel a split-level home

Given the fact that split-level and divided entry homes were a hit in the 1940s and 1950s, many of them are in need of remodelling today. However, remodelling must come with a fair amount of planning because floor plans are fairly unique and can offer some pretty big challenges unless they’re well thought over.

The best place to start is to consider what you want out of your home, which is often dictated by what your needs actually are. Sketch out on a notepad what you would like to see happen in your home and make a list of wants/needs, because you’ll want to share these with a designer who has the experience to tell you what’s possible, what’s impossible and what you can do on your budget.

Do you have a love/hate relationship with your split-level? It’s probably what’s driving you to research remodelling options, because it’s really just a series of boxes on multiple levels. This has its advantages as everyone in the family get’s their own space, but it can also feel cramped and the lack of open space can leave you yearning for something more, especially entertainment space.

Natural light getting into the home is limited given all the walls, but this is something that can be remedied by adding windows to both sides of a corner.

The traditional split-level is lacking in details, inside and out. Most of them have stairs that are far too close to the front door, which severely limits the landing space. They lack in curb appeal, but they’re affordable.

Fortunately, what you love about your split-level can stay and the things don’t you like can be addressed by a trusted design-build contractor with experience remodeling this style of home.

How to modernize a split-level home interior and exterior

Exterior remodelling can really boost the home’s curb appeal and take that decades old look and modernize it. Common exterior modernization projects include removing old foliage and bringing in lights to illuminate your walkways.

Modernizing the interior can get fairly complex, but some of what works in other style homes works with split-levels, as well.

If your split-level has a bunch of small, boxy rooms, you’re part of the club of many living in similarly designed homes. That’s why it’s quite common to see these projects involve taking down walls between two bedrooms and creating a master suite, complete with a walk-in closet.

Furthermore, if you’re enthralled by cathedral ceilings, or something close to it, achieving these things is a possibility in some split-level homes. You can also create more of an open floor plan by taking down your railings and replacing them with glass panels.

Expanding the kitchen area is also a popular project in remodelling a split-level. Also, if you decide to open up the rooms on the main floor, you can create a “great room,” which can provide that much-needed relief for an entertainment/gathering area where you can huddle with your family and entertain guests.

Adding an addition to a split-level home

If you’ve outgrown your split-level home, you don’t have to leave it. You can add an addition, either up or out. The following are some of the more common addition projects home owners request of contractors:

Include a Master suite

Knocking down a wall or two can provide the extra space you need for a larger bedroom, complete with a walk-in closet and bathroom, but you can also add a master suite addition so you can take advantage of the existing square footage in your home and accommodate other needs, such as entertainment space.

One of the more frequently complained about aspects of a split-level home is the lack of natural light due to all the walls and series of boxes (rooms) throughout. You can get that much-needed light by creating a sunroom on the south-facing section of the home. You can use however you like – as a plant-rich area, an entertainment area and anything in between – it’s up to you.

Get an extra bedroom

If you’ve taken down walls to create a more open floor plan, you’ve likely rid yourself of a bedroom or two. You can gain back that needed bedroom with a bump-out addition.

Extra room for the kids

If your family is growing and you’re feeling the need for extra space, but want to be flexible in how it’s used over the next decade or two, taking on a “new room” addition can ease your space issues while giving you options for the future. What might be used as a bedroom now can be turned into an office or hobby room years from now.

Homeowners have evolved their thinking about kitchen use today – they’re going bigger and bringing in more entertaining amenities. If your current space simply won’t allow for that vision, taking on a kitchen addition will take care of your needs.

One of the characteristics of a split-level home that most share is that they’re built with an attached garage. With the garage often on the same level as the basement rooms, which could include rec/game rooms, small living rooms and office space, the wall between these rooms and garage are often taken out to create more usable space.

This can lead to expanding the footprint of the home by adding a one or two-car garage. If space isn’t limited and the budget allows, a three-car garage can be part of the plan.

How you improve your split-level home all depends on which areas are in the direst need of improvement. For some, the landscaping is just an eyesore, but for others, it’s a closed-in, claustrophobic floor plan that needs to be opened up.

Modernizing through extensive paint, carpet, curtain, and fixture replacement can give some split-levels new life, while others will require an additional room or garage.

Take stock of the contractors nearest you and pick one with experience working on split-level remodeling projects.

Can you remodel a split level home?
Yes, definitely you can easily remodel the split level homes with some creativity and hard work.
Is a split level home a bad investment?
No , if you learn to use them properly and they are built according to your need they are not a bad investment at all.
How do you increase a curb appeal in a split home?
Paint the front door. No one is welcomed by grime and chips out of the front door. Give it a quick coat of paint.Mulch.Fresh mulch shows the house is taken care of.Put out a new doormat. Don’t ruin a beautiful porch with dingy doorm.
Are split levels making a comeback?
Yes , with increased trend of liking of split level homes they are definitely making a come back and they are getting popular again.
What are the disadvantages of split level home?
Some of the very features that make the split level home design desirable also made it undesirable in other circumstances. Homeowners had to ensure that toddlers did not fall on either of the two sets of stairs. Cleaning three separate levels required a great deal of stair climbing.